Looking to follow popular profiles to get some inspiration? Then, you are in the right place. In this article, you’ll find an up-to-date collection of the most followed Instagram accounts.

The below-listed profiles are rich in hot pics and engaging posts. Therefore, they will become the source of priceless info on how to boost your own audience. Just be observant and grab the tricks!

Here you can see the list of top Instagram accounts dated back to August 2020 created by the Statista service. We placed it in this article because the list hasn’t changed so far. However, the numbers have grown. 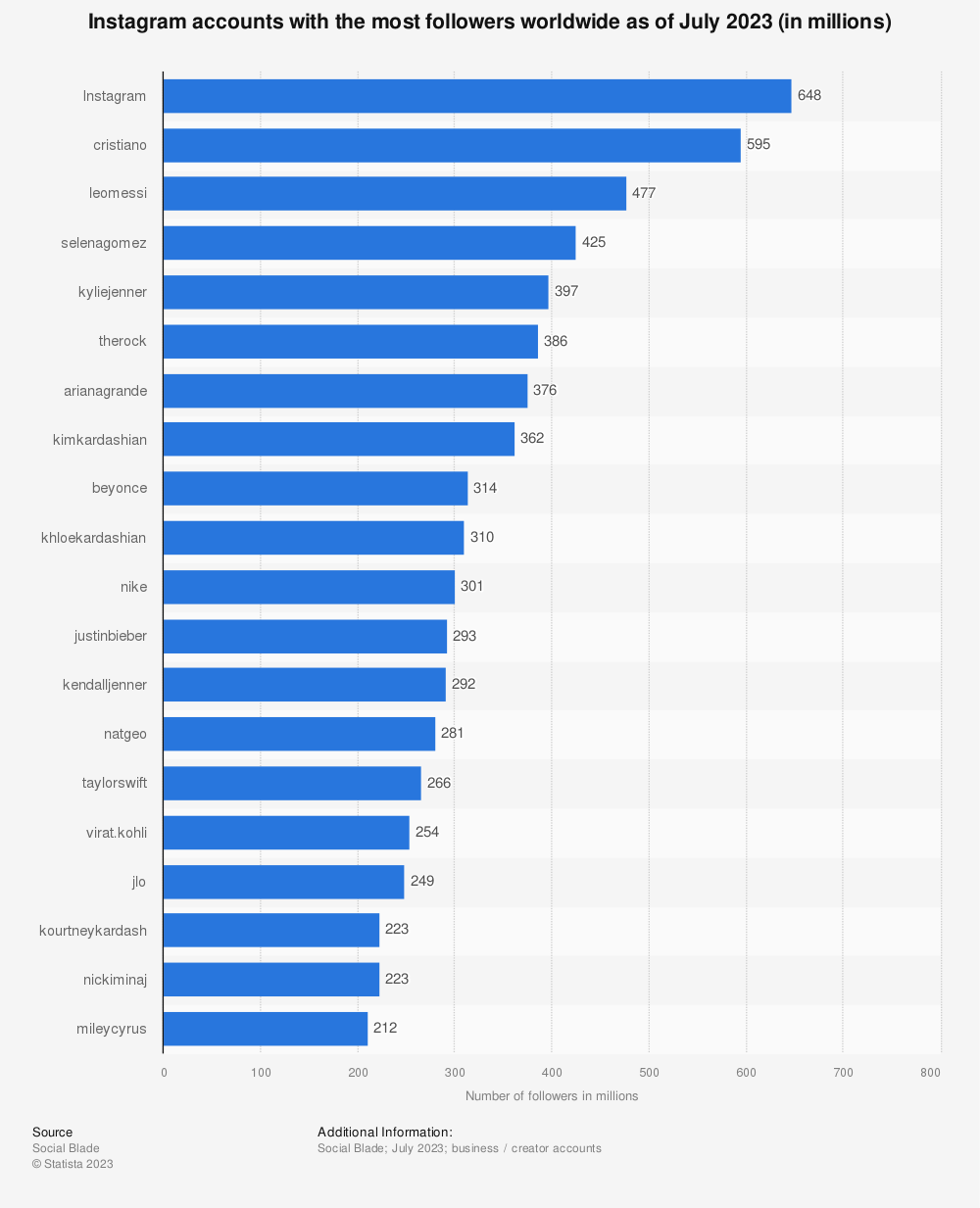 Let’s take a quick look at the accounts that have the most followers on Instagram.

His account stands out with its crazy content displaying Justin’s eccentric pranks. And his photos and videos really differ from those sweet pics other pop stars post every day. But maybe this is what so many fans love him for?

Beyoncé has already become the legend of the world show business and needs no introduction. Her albums have always been selling like hot pancakes, so you’ll hardly find free space on her personal awards wall.

The pop star proudly keeps the status of the most nominated singer in the entire Grammy history. And, of course, her Instagram account fully reflects her glittering lifestyle.

Next up we have the owner of a truly countless achievements, the captain of Barcelona FC and the Argentinian national football team Lionel Messi or “The Flea” (the nickname given to him by the fans).

Frankly speaking, he has already won so much fame and respect that he got tired of it a long time ago. That’s why the sportsman uses his social service account to publish photos with his family and share only the most emotional game moments.

Today Kim is much more than a TV star, socialite our businesswoman. She has become the legend of our time and the idol for numerous fans from all over the world.

Her public image allows generating megatons of visual content. No wonder that each new post invariably causes a stir. And it’s not so important what she will show next time, as almost 190 million subscribers are happy with any news.

Selena Gomez is a singer, actress, composer, songwriter, model, and UNICEF Goodwill Ambassador. Her career began in 2002 and has been very eventful so far.

Unluckily, the heavy workload affected the health of the young pop star. But the struggle with the disease made Selena even stronger. And today, her Instagram account is a showcase of how you can look great anywhere, anytime.

Designer outfits, posh jewelry, dressing room pics with other celebs… We bet, it’s unlikely that millions of subscribers expect to find another content in her profile.

Kylie, being younger than her sister Kendall, has already significantly surpassed her in terms of the number of followers. But the methods and purposes of using Instagram for the two sisters are almost identical.

So, if you want to keep your fingers on the pulse of the bohemian life, this account is not a bad choice.

Mr. Johnson was a famous wrestler when decided to completely change his life. He demonstrates how the impressive physical strength and professional charisma can turn a sportsman into a real movie star.

It’s no wonder that the mighty “Rock” has many friends and fans all over the world. And according to his Instagram profile, he doesn’t mind taking some random pics with his devotees on stage, in the gym, on the street, etc.

Our last musician on the “highest followers on Instagram” list is a young superstar Ariana Grande. Despite the young age, Grande has successfully recorded several commercially popular albums and picked up awards on both sides of the Atlantic. Apart from that, she takes part in cartoon dubbing, stars in TV series, and television shows.

To sustain a “sweet girl” image, Ariana often posts custom collages of herself, short videos, and photos received from her fans.

And here comes Ronaldo! His name is associated with the highest transfer fees ever paid to players. And now the Italian Juventus striker is unofficially considered the best player of our time.

Needless to say, that the official holder of the “Best footballer of all time in Portugal” title does not complain about the lack of attention. Therefore his Instagram is equally devoted both to his football career episodes and to his private life as well.

This account has a clear purpose – to display the best and the most interesting people and trends. The feed looks really inspiring as each of their post shows the diversity of the world we all live in.

Written by Alena
As a digital marketer and a copywriter, Alena is passionate about wrapping difficult things in simple words.

Sorry. No data so far.

How to run an Engaging Instagram Giveaway in 10 Steps